The story of a young woman who risked her life to be good enough for her boyfriend only to end up losing him has been told by a Twitter user.

The Twitter user, Nelly Agbogu revealed that the who later lost the boyfriend in her early twenties began taking pills to lose weight because her boyfriend had been complaining about her weight.

The pill shot up her blood pressure and she suffered a stroke. After the incident, the boyfriend dumped her for another woman.

@nellyagbogu tweeted: “Just heard a heartbreaking story: Lady was so desperate to lose weight because her boyfriend had been complaining. She bought some pills which shot up her blood pressure and she now has a stroke!Did I mention she is in her early 20s?Yea her BF has moved on. Pls let’s be guided.” 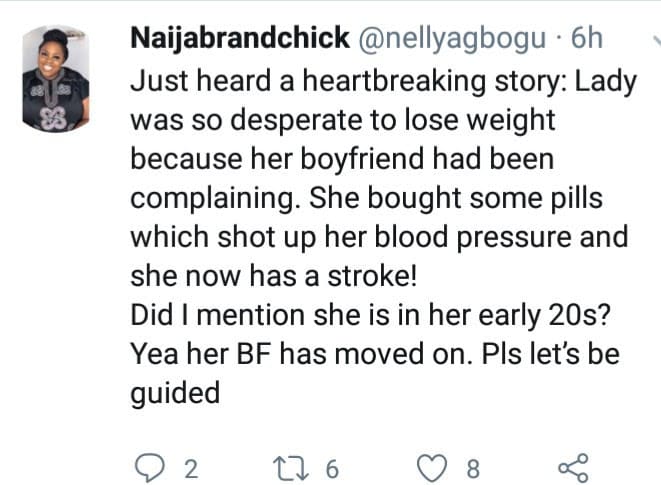 Police officers Attacked For Trying To Rescue Robber From Mob

Nobody ‘Has The Right’ To Question Meghan Markle And Prince Harry’s...