A white man, Joshua Witt, who lied that he was stabbed by a black guy because of his nazi haircut has confessed that he stabbed himself and lied about it. 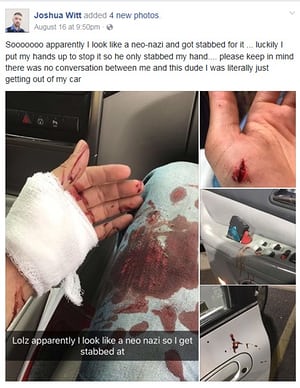 The 26-year-old told police two weeks ago that he was stabbed after getting out of his car in the parking lot of a sporting goods store, Buzzfeed reports. He’d said:

I was just getting out of my car to go get myself a milkshake and the next thing I hear is “You one of them neo-Nazis?” as this man is swinging a knife at my head over my car door.

I threw my hands up out of natural reflex and then I kind of dived back in my car as the suspect took off running.

But after the police investigation, it was revealed the man had lied about it all.

Police checked surveillance videos and did not find anyone at the scene, although his car was in full view.

They also questioned the black man fitting the description he gave, and they found he was innocent.

Confronted by the police, Witt confessed he actually stabbed himself and lied he was stabbed by a black man.

He said he “mistakenly” cut himself while parked in front of the sporting goods store.

Joshua Witt has since been arrested and released on a summons and could face a fine of $2,650 and up to a year in jail if convicted of false reporting, according to Guardian.

Bernie Sanders Drops Out Of US Presidential Election

Coronavirus – Nigerians Stranded On The Street Of China, Hunted Out Of Their Homes (Video)

Bernie Sanders Drops Out Of US Presidential Election