President Trump formally rolled out his 2018 budget plan Tuesday, and lawmakers from both parties wasted no time in pushing back, with many proclaiming it “dead on arrival” and arguing that the proposal goes against many of Trump’s campaign-trail promises.

“The president’s budget isn’t going anywhere,” said Sen. Bill Cassidy, R-La. Cassidy added that “Trump’s campaign contract with the American people should be fulfilled” by keeping health care costs low, something he said the budget does not do.

“This budget exposes all of that verbiage for what it really was, just cheap and empty campaign rhetoric that was meant to get votes,” said Sen. Bernie Sanders, the top Democrat on the Senate Budget Committee.

Trump’s budget calls for sweeping cuts to the social safety net, slashing $800 billion from Medicaid over 10 years in conjunction with a health care bill approved by the U.S. House of Representatives earlier this month.

Other programs designed to combat poverty, ranging from food stamps to Social Security Disability Insurance, would also see their funding slashed. The document calls for a bevy of tax cuts as well.

“We looked at this budget from the eyes of the people who were actually paying the bills,” Mulvaney told reporters Tuesday. 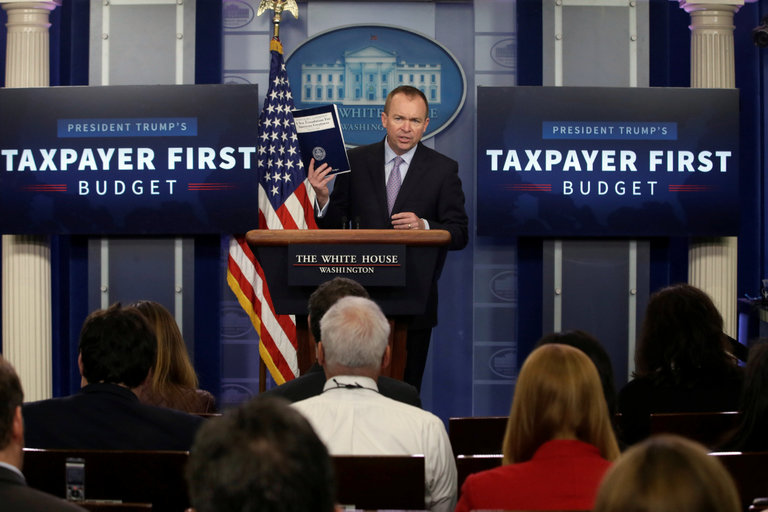 “For years and years we looked at the budget in terms of those on the back end of the programs, the recipients of the taxpayer money.

We haven’t spent nearly enough time focusing on the people paying the taxes.”

But the proposal has met skepticism from Congress, with both Democrats and Republicans noting that the budget is a step away from statements Trump made while running for president.

Among other things, Trump assured voters that there would be no cuts to Medicaid under his administration.

“[The budget] is once again an example of the rhetoric of the campaign not matching up with the reality of governance,” said Sen.

Martin Heinrich, D-N.M., who noted that the budget hit rural areas, such as his home state, particularly hard.