A man driving a black car shocked a Florida teenage student when he approached her on May 9.

The Freedom Middle School sixth grader said she was terrified after a man, who appeared to be driving an early model Ford Lincoln, asked her to come closer while pointing a video camera in her direction.

“He’s like, old looking, and he has a camera in his hand and he’s smiling at me and telling, with his finger, telling me to come here,” the teen whose identity has been withheld. 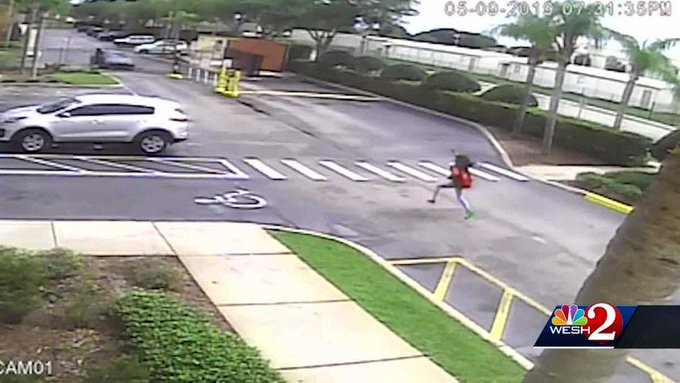 She told the news outlet she did not feel comfortable and started running away from the driver, but the car continued to move in her direction, causing her to panic.
“I run and he’s still following me, and when he’s still following me, I’m like about over there, and then I’m running and crying and screaming, ‘Help me,’ so someone could come and stuff,” the teen said.

She fears if she did not act quickly, the man might have grabbed and kidnapped her.

“It’s just shocking because if I didn’t do (anything), if I didn’t run or anything, he probably would have gotten out of the car and probably grabbed me,” she said.

Security systems in the Orlando apartment complex she lives in recorded images of the car following the teen who was seen running in the opposite direction to the gate.

The teen’s mother was relieved her daughter made it home safely and believes the teen truly thought she was in danger.

“I could sense my daughter was scared by the way she was running. I’ve never seen her run like that before,” the mother, who also wished to remain anonymous, said.

The mother said she had good reason to believe the driver had plans to kidnap her daughter.

“It’s a parent’s worst nightmare to see something like that, and to know that there’s people out there watching children like that to try to take them, or do whatever they want to do with them,” she said.

The family has reported the matter to authorities and hopes that their decision to go public will help warn other parents in the area and help keep the local children safe.

“Talk to your kids. Let them know stuff like this can happen. You may not think it can or will, but it does happen,” the child’s mother said.

The Orange County Sheriff’s Office has confirmed it is investigating the incident.