Dj Khaled is set to release his album on Friday and the tracks on the album include a collaboration with slain rapper Nipsey Hussle. A behind-the-scenes video has now been released showing Hussle on set days before he was killed.

According to TMZ, Nipsey Hussle’s final day on a music video set was an uplifting, almost spiritual experience alongside DJ Khaled and John Legend. The behind-the-scenes footage obtained by TMZ shows the three men recording the video just a few days before Nipsey’s death.

The video setting was atop a parking structure the crew rented out in nearby Inglewood. John Legend can be seen at a grand piano, while Nipsey, in a head-to-toe blue suit, can be seen dancing alongside Khaled. Right next to them are classic cars with hydraulic suspensions firing. 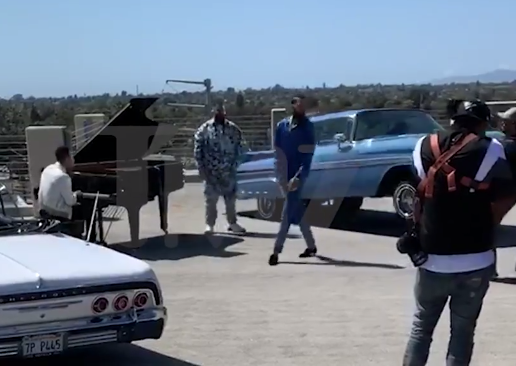 The video is for the track “Higher,” a collaboration between DJ Khaled and Nipsey Hussle which will be on his upcoming album, “Father of Asahd.” Khaled has revealed that all the profits from the track will go to Nipsey’s kids.