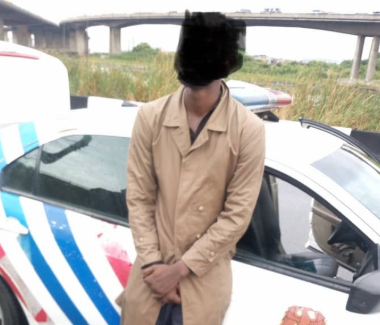 Men of the Rapid Response Squad, Lagos state Police Command, this morning prevented a man from jumping off the 3rd mainland bridge in an apparent attempt to commit suicide.

According to the official handle of the RRS, the man when interrogated, revealed he was an accountant.

This man, (name withheld) was prevented from jumping off 3MB into the Lagoon this morning. We had a little chat with him and he revealed that he’s a graduate and a chattered accountant. He was handed over to Adekunle Police Station, who have contacted his family.

This will be the second person to have attempted to commit suicide by jumping off the 3rd mainland bridge in the last one week.

Commercial Vehicle Rams Into OAP Sensei Uche&#8217;s Car To Prevent His Bus From Plunging Into The Lagoon Beneath 3rd Mainland Bridge