The Egypt international has yet to hit the heights of last season when he plundered a record-breaking 44 goals.

Salah cut a forlorn figure after his mistake led to Kylian Mbappe equalising for Paris Saint-Germain on Tuesday night and he was taken off before Roberto Firmino struck a dramatic late winner in the Champions League at Anfield. 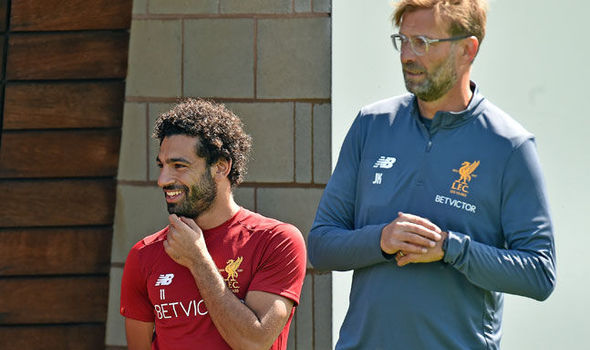 But Klopp insists he’s been more than satisfied with Salah’s contribution to the Reds’ stunning run of six straight wins.

“On the defensive side, the last two games he was outstanding, perfect, and it is so important in these games especially, so that says everything about him,” Klopp said.

“He is really ready to work for the team in these moments. It is a completely normal situation for an offensive player that they have times when they don’t score.

“But he is still a threat, has fantastic situations in both games and he is in good shape. Finishing is something you can never take for granted. I would never do that, the players should never do that – only the supporters are allowed to do that. The most important thing is physically he is in a very good shape which helps.”

A year ago Salah scored three in his opening six appearances for Liverpool before he showcased a ruthless streak. This time around he’s managed two goals in half a dozen games.

“Wow, that’s a crisis!” Klopp joked. “No-one remembers that, it is really no problem.

“Of course everyone expects that (he will be as prolific as last season) but we don’t expect that. We want him to score as often as possible.

“We constantly have to deal with new situations. People are very positive about this player, this player, and I have to decide do I talk to them about them or not, do I leave him alone in this situation, but everything is fine really.