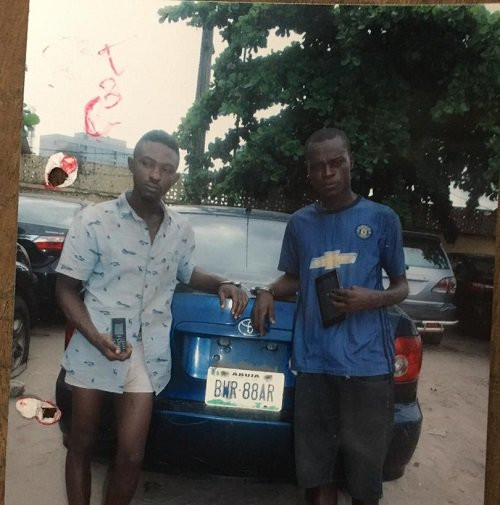 Two suspects, Daniel Abah, 27, and Edwin Edache, 31, have been arrested by the police for allegedly attacking a Taxify driver, Alfred Moses, along the Lekki-Epe Expressway, Lagos, and dispossessing him of his Toyota Corolla car, Punch Metro reports.

According to the police, the suspects, both from Otukpo, Benue State, boarded the complainant’s car as passengers on the Lekki-Epe Expressway and asked him to convey them to the Ibeju-Lekki area of the state sometime last month.

Midway into the trip, the suspects allegedly announced to the driver that they were robbers and that he should park the car and hand over the key to them or else they would kill him.

The police further alleged that when the driver refused to stop the car, Abah held him by the neck, while his accomplice, Edache, poured petrol on his face, which forced the driver to suddenly stop the car.

The duo reportedly dragged the driver out of the car and drove away.

It was gathered that  Moses after regaining consciousness, reported the matter to the Divisional Police Officer in charge of the Maroko Division, who led his men to track the car to the suspects’ hideout in Lekki.

The suspects were arrested while they were looking for a buyer for the car.

During investigation, according to the police, the suspects allegedly confessed to the crime that they intended selling it to enable them raise money to start a business.

The suspects were arraigned before the Igbosere Magistrates’ Court on three counts bordering on robbery.

The police prosecutor, Reuben Solomon, told the court that the accused posed as passengers and boarded the complainant’s car and later robbed him of the vehicle and his phones.

The accused, however, pleaded not guilty to the charges before Magistrate S. Sasanya, who granted them bail in the sum of N200,000 each with two sureties in like sum.

Sasanya adjourned the case till July 19, 2019, for mention and ordered that the defendants be remanded in the Ikoyi Prison, Lagos, till they would be able to perfect the bail conditions.

Graphic: Man Set On Fire By Hoodlums Dies In Ajah