A mother has claimed that her 6-year-old daughter was kicked out of daycare because she wore a shirt that had “Black Lives Matter” written on it.

Deval Brockman, from Russellville, Arkansas, said her 6-year-old daughter named Journei Brockman has been attending daycare at “His Kids Preschool” for six months. However, she was told last Friday, June 26, she could not return.

Deval Brockman told FOX16 that her daughter’s school called her last Thursday, June 25 and an employee told her that she didn’t “like” or “agree”” with the shirt. The employee also asked that Brockman not send her daughter to the school wearing it again.

Brockman said she reported the complaint to state officials and she was told that her daughter could wear the shirt unless it contained profanity.

Journei Brockman returned to the preschool last Friday, wearing a different shirt with an image of a raised fist printed on the back, which is the Black Lives Matter symbol. When Deval Brockman picked her daughter up at the end of the day, she was told her daughter was no longer welcome at the school. An employee allegedly said that the shirt was encouraging racism. 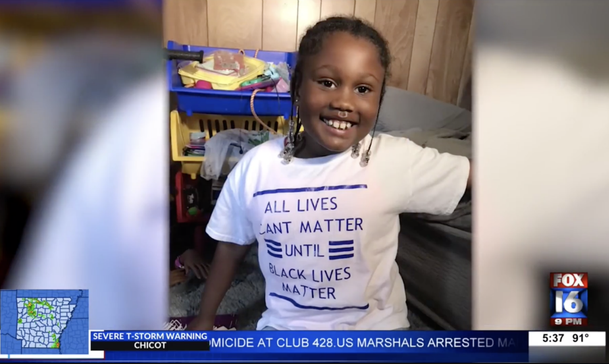 “I got very upset. I’m just like are you serious? Over a T-shirt?” Brockman said.

She claimed that a school director also told her, “I am not going to tell you how to raise your child, but you need to reevaluate how you’re parenting her.”

“It’s not political, it’s everyday life, it’s all over the news. Right is right and wrong is wrong,” Brockman said.

Patricia Brown, director of His Kids Preschool, said in a statement to FOX 16, “We feel a childcare environment is not a place for a parent’s political views to be addressed or played out, regardless of race.”