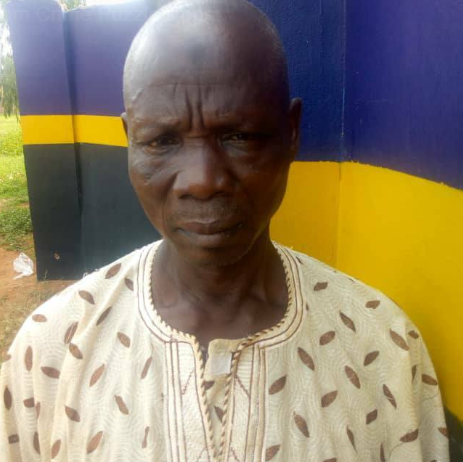 65-year-old, Sulaiman Rauf, pictured above, has been arrested by the Ogun state police command for defiling a 10-year-old girl at their home on No. 7 Araromi Street, Ilase on Sunday, April 7th.

According to the police, Suleiman lived in the same compound with the victim’s family. On the day of the incident, he asked the victim to help him buy something from a nearby shop. When she returned with his item, he lured the little girl into his apartment and defiled her. The little girl got home and told her father, Fahinhun Matthew, what the suspect had done to her.

Confirming the incident, the Ogun State Police Public Relations Officer (PPRO), DSP Abimbola Oyeyemi, said that the victim’s father formally lodged a complaint at the Idiroko Police Division, following which, the DPO, CSP Aloko Amodu, swiftly detailed his detectives to their compound where the suspect was arrested.

“On interrogation, the randy old man admitted having carnal knowledge of the victim but claimed not to know what led him to it. The victim has been taken to General Hospital, Idiroko for medical attention and report.

Meanwhile, the Commissioner of Police, CP Bashir Makama, has ordered the immediate transfer of the suspect to Anti-Human Trafficking and Child Labor Unit of the State Criminal Investigation and Intelligence Department (SCIID), Eleweran in Abeokuta, for further investigation and prosecution” Oyeyemi said.